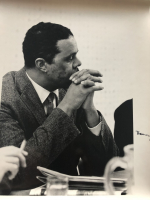 Randolph Wilson ("Bill") Bromery (January 18, 1926 – February 26, 2013) was an American educator and geologist, and a former Chancellor of the University of Massachusetts Amherst (1971–79). While Chancellor, Bromery established the W.E.B. Du Bois Archives at the University of Massachusetts, and was one of the initiators of the Five College Consortium. He was also President of the Geological Society of America, and has made numerous contributions as a geologist and academic. During World War II, he was a member of the Tuskegee Airmen, flying missions in Italy.

Bromery is my maternal grandfather and has been the inspiration for much of my life's work. His influence on my interest in jazz, art and cooking as well as a dedication to Black history and social justice have shaped my practice. The above overview is the wikipedia version of who he was. This project is dedicated to shaping who he continues to be for so many of us. I am grateful to The National Visionary Leadership Project for capturing these insights to his legacy.