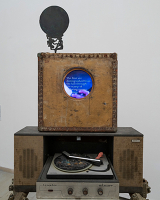 Al Lettore Benevolo is a sculpture and film realized for the exhibition Bellezza e Terrore that examines the continuities of colonial violence within the Italian context. Realized in collaboration with Daphne Budasz, co-founder of Post Colonial Italy, a mapping project dedicated to sites of colonial history in Italy, the work employs a series of mirrors that echo those of ancient Roman, Etruscan and Greek canons but are inscribed with images that are drawn from a series of Italian postage stamps, known as “Pittoriche Coloniali”, that represent romantic and idealized imaginaries of Italian colonies in East Africa. These images replace the deities typically present on the original mirrors intended to inspire morality and piety. The video transfer from super8 film consists of Budasz seated in an unmarked site in Florence that was host to racialized violence spit shining the mirrors cut against a dizzying survey shot of the monument Ercole e il Leone by the Florentine fascist sculptor Romano Romanelli. This public monument is amongst those charted in Budasz’s project. It was placed in the square in 1937 just after the invasion of Ethiopia becoming an allusion to the conquering of the “lion of Judah”. The imagery of the video is enriched by the voice of griot Dudu Kouate who reads from the preface to the 1897 book Cose Affricane by Ferdinando Martini, Governor of the colony of Eritrea. The text solicits benevolence and restrained judgment from the reader. The voice is laid atop a vintage recording from an educational program designed to introduce and celebrate Black poets with distorted notes that speak to an archive warped by time. The sculptural support for the video is composed of a reclaimed speaker casing and a LESA(company founded in Milan in 1929 that rapidly expanded in the 30’s) record player. The video screen encased in the speaker box is topped with one of the brass mirrors from the film and the sculpture sits atop a scaffolding support that draws its form from the triumphal arch erected in 1938 in Naples to welcome the arrival of Hitler.